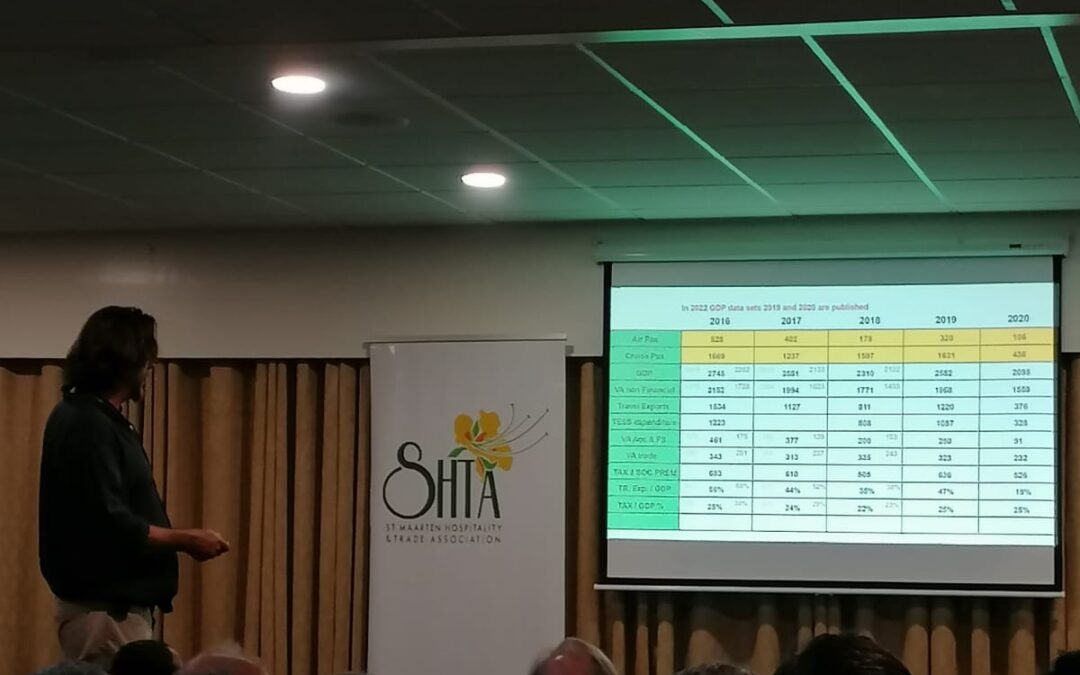 Members came together to hear an address of the sitting President Paul Henriquez on the state of the economy and its recovery from both Irma and the pandemic.

The presentation focused on GDP Value Added, defined as:

The value added of an industry, also referred to as gross domestic product (GDP)-by-industry, is the contribution of a private industry or government sector to overall GDP. The components of value added consist of compensation of employees, taxes on production and imports, less subsidies, and gross operating surplus.

Statistically speaking, Sint Maarten seems to be much more productive than Aruba per tourism dollar spent, reflected in the much higher GDP per capita.  This is difficult to reconcile with the situation on the ground.

Another issue, from the exit surveys it also becomes clear that the spending on the French Side is being attributed to the Dutch Side. This is methodological, easily verifiable and when corrected leads to substantially lower tourism spend.

We know Aruba to have a significantly higher REVPar as well as a much higher stayover to cruise ratio. This makes it extremely unlikely that St Maarten can be more than twice as productive with the same tourist dollar spent.

It appears that both GDP and Value added per sector are woefully overvalued.  There are risks associated with overvaluation since both Debt/GDPand Tax/GDP ratios are as much dependent on an accurate gdp number as debt or tax income. Within the framework of the COHO and reform agenda success is contingent on having good GDP statistics. We need to make sure that wishful thinking doesn’t cause a too high tax estimation to turn into debt.

There is a big difference in what you can afford to finance as an economy if your VA added is 1.9 Billion or 2.7 billion. The Official GDP dataset has seen a 42% increase in just 3 years. This has never been substantiated and in fact the IMF is using significantly lower projections.

The benchmarking analysis did offer one very positive point.

Regardless of what our official statistics indicate that GDP is or isn’t. The simple fact is that in reality we are underperforming Aruba.  We are sitting on a lot of empty hotel rooms that could be turned into productive capacity.

Technically there is room for increasing Stayover Tourism by 61%, for May 2022 that would have meant almost 40000 additional room nights, for the wider economy that means, 61% more meals, 61% more shopping and tours, 61% work and jobs, 61% more rented cars, 61% more tax revenues etc.

All this can be achieved by adequately marketing Sint Maarten. There is no investment needed in increasing capacity.

Aruba consistently drives up demand and thus their REVPar value is almost double that of St. Maarten leaving a further 40% underutilized capacity. In order to change these two critical indices and increase our productive capacity for the benefit of everyone the SHTA argues that there is no better time to put in place a Public-Private Destination Marketing Organization, possibly copy pasting the Aruba legislative structure, in order to facilitate real destination marketing, putting unused capacity into use immediately!  To the extent that this cannot be achieved in a structural partnership as we have been advocating for years on end, the SHTA urged its members to join together with them in creating a private sector destination Marketing plan to increase our productive capacity and reap the potential spin off rewards of increased jobs, income, trade, taxes, dinners, tours, gambling etc.

The fact that our official statistics like GDP appear to be estimated way too high, combined with the need to finance reforms and service debt, it seems logical that we at the very least invest in putting idle capacity to use, in order to generate the required value and funds.

Other agenda points were the new term Board postulations, A year in review of the activities of the association.

The SHTA is dedicated to bringing quality to all aspects of life on St. Maarten by promoting sustainable economic development for its members in cooperation with the social partners and the creation of a fair marketplace. For more information, please contact our offices at 542-0108 or visit our website at www.shta.com.