Kidz at Sea Foundation grateful for successful Regatta and fundraiser 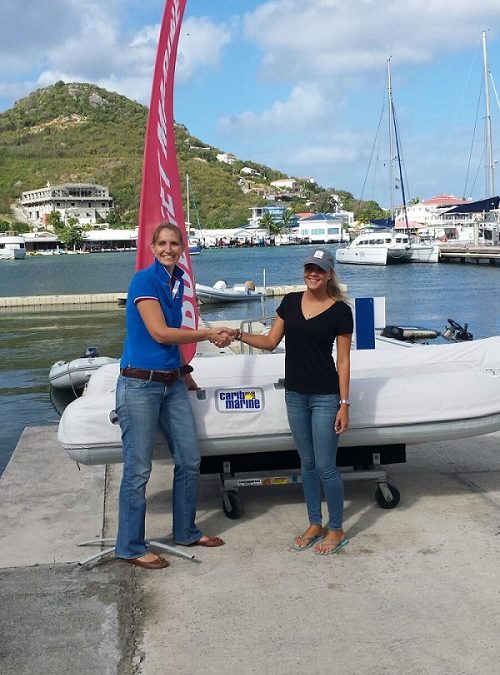 Simpson Bay, St Maarten – March 15, 2017 – Kidz at Sea Foundation looks back at a very successful St Maarten Heineken Regatta and its fundraiser that took place during this weekend. 2 teams of local youngsters sailing aboard MoonDance and Purple Heart were awarded the trophy for Best Youth Sailing Team. The fundraiser that took place on Thursday and Saturday evenings from the Kidz at Sea Foundation booth raised over $8,000 for which the Foundation would like to thank the local community, sailors and visitors.

The Kidz at Sea Foundation spent months preparing and practicing for the 37th St Maarten Heineken Regatta with 12 St Maarten youngsters that enjoyed another fun sailing event. Although the sailing conditions and classes were challenging and results weren’t what was hoped for, the teams still got awarded with a special trophy for Best Youth Sailing Team which was a great ending of the Regatta.

Garth Steyn, founder of Kidz at Sea, mentions: “The kids were thrilled to sail in the event, that for them was already a huge accomplishment. The daily results were disappointing, we competed against some very strong boats, but this never got their spirit down. To be awarded Best Youth Sailing Team was truly unexpected but such a compliment and the youngsters did see this as their greatest achievement yet.”

The St Maarten Heineken Regatta Foundation made a booth available to the Kidz at Sea Foundation for them to organize a fundraiser. With the support of many local businesses, like Budget Marine, Oyster Bay Beach Resort, ILTT and Office World a raffle was held, for which hundreds of people bought tickets.

Garth Steyn adds: “The Carib Marine Dinghy, donated by Budget Marine, made a lot of people buy raffle tickets, but we noticed that most people just wanted to make a contribution to our cause as they recognize the importance of introducing youth to sailing. The Kidz at Sea Foundation does this not only through its sailing program, but also through the ‘Build your Future’ project, where St Maarten students build a sail boat as part of their curriculum—Purple Heart being the first keelboat completed by our students.”

The ultimate goal is for us to provide St Maarten youngsters with skills that could get them hired in the Marine Industry, develop themselves personally through team work, discipline and persistence and to show them what the full scope of the Marine Industry. Many of the people who made a donation mentioned what an impact sailing had on them as a kid. The Foundation is terribly grateful for the support received and the funds that were raised and are looking forward to be able to get more youth involved in our projects.”

Kidz at Sea’s international sponsor, Essilor USA, donated high end sunglasses as prizes and assisted in selling the raffle tickets, but more importantly, spent several days with conducting  eye exams and providing free prescription glasses to those in need at Milton Peters College, and the White and Yellow Cross.  Both of Kidz at Sea’s social partners Ujima and the ICAN foundations were also fully included in the free eye exams.

The Kidz at Sea Foundation is proud to announce Gill USA as a new international sponsor. Impressed with the Foundation’s fundraising efforts and dedication, they agreed to match every dollar donated, helping to raise over $8,000 as a result.

The Kidz At Sea Foundation was started in 2012 with the goal to introduce St. Maarten youth to all prospects of the marine industry by means of boat building and sailing. Furthermore the two programs will teach the students specific industry related skills and encourage personal development, giving them an advantage for their future. For more information about the foundation check out www.kidzatsea.com or contact sxmsailing@gmail.com