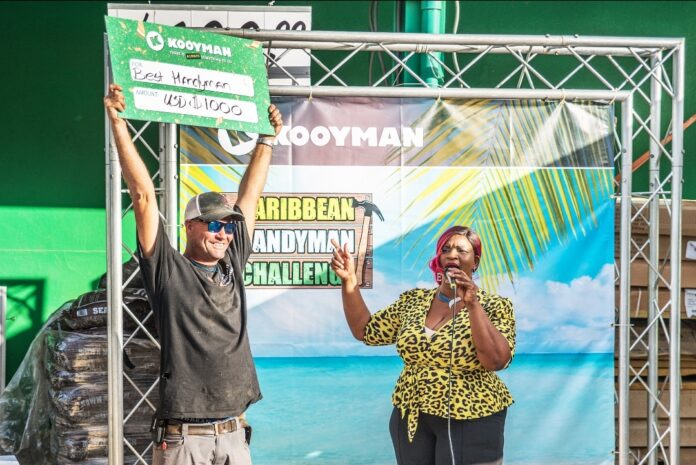 Kooyman St. Maarten has crowned the local winner of its Caribbean Handyman Challenge! After 6 weeks of competition, Arjen Vliegen emerged the winner with a prize of USD $1,000 Kooyman cash.

When the Challenge initially launched on April 30, Kooyman received an overwhelming number of registrations. Ten contestants were selected for Round 1 where they then had the assignment of building a chair that rocks. “We received some really great projects. We have a lot of talent on this island and it was great to witness the process”, said Evencia Carty-Seabrookes, Commercial Officer at Kooyman. The chairs were then judged by a trio of local judges and by public vote. After combining the judges and online votes Max Cadillon and Arjen Vliegen emerged as the two finalists.

The two finalists then had the challenge of building a doghouse live, on site at Kooyman. Carty-Seabrookes stated “It was exciting to watch. Witnessing the two finalists create these elaborate projects in the short time they had was very inspiring. We at Kooyman always aim to celebrate the DIYers, the weekend warriors and the at home handyman, and this Challenge definitely did that.”

Arjen Vliegen will now go on to compete against the other local winners in Curacao, Barbados and Aruba to see who will be crowned the overall winner of the Caribbean Handyman Challenge. Voting will be done online and the winner will be announced on July 1. The winner will receive USD $3,000 Kooyman cash.