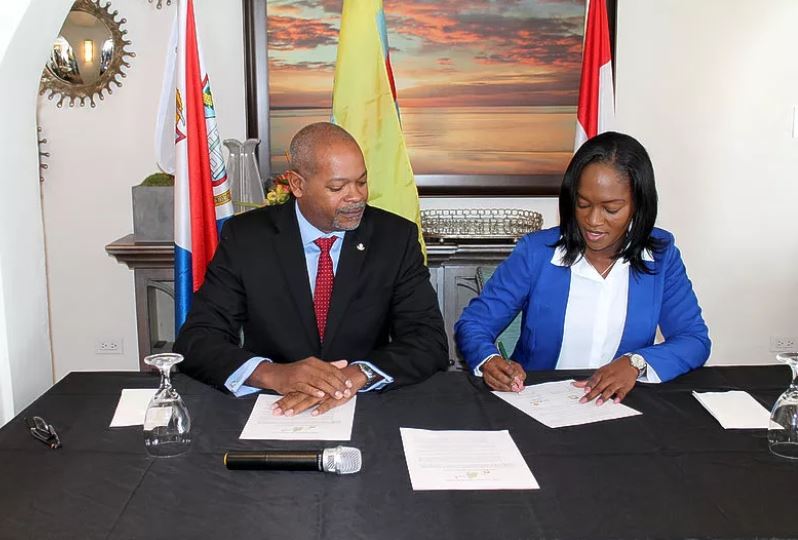 OYSTER POND–A memorandum of understanding (MOU) was signed in Oyster Bay Resort’s Infinity Restaurant on Friday by government representatives from both sides of the island to officially clear the way for creation of a joint tourism development master plan.

The signatories to the MOU were First Vice-President of the Collectivité of St. Martin Valérie Damaseau and the Dutch side’s Tourism and Economic Affairs Minister Cornelius de Weever. The signing had historical significance, as even though the two sides had informally cooperated on promoting the island in the past, no joint strategic plan had been implemented until now.

“This signing represents true cooperation, cooperation that is long overdue in the tourism field,” said Damaseau in her remarks. “In these crucial times we must think wisely, act fast, and move strategically. That’s where joining forces comes in. This MOU will allow us to market and promote the destination with one voice. “Visitors don’t see two different islands, they only see one island. It’s only us that don’t look to capitalise on that and realise the uniqueness that we have. “We constantly talk about friendliness of the island, the resilience of our people. That is something I always champion and it cannot be denied. Irma could not touch that. It’s important that we capitalise on the strengths and uniqueness of both sides to create a product that is competitive and appealing. The island has an opportunity to re-write its future and become a model for Caribbean tourism. Together, it’s time to act now.”

De Weever said it was ironic to be back in Oyster Pond, this time under very positive circumstances. He was alluding to the confrontations between the two governments over the Oyster Pond border, something he hoped “will never happen again.” “I’m proud and honoured to sign this document with my colleague, because united together we can accomplish a lot more. Irma did not stop at the border on September 6. Everyone was touched by the force of Mother Nature. But our determination to get back up and help one another recover together never ever faded.

“Despite the destruction, Princess Juliana Airport, the A.C. Wathey Cruise Facility and the Galis Bay Port continued to facilitate visitors to St. Martin. Those visitors have shown us they have not given up on St. Maarten. On the contrary, they have shown us how loyal they are. “Today’s MOU signing will allow both sides to work together, share our resources, to bring back this 37-square-mile multi-cultural island flavour to a previous era, even better than it was. This is the beginning of a brighter future for one St. Maarten/St. Martin.”

The signing of “One Island Cooperation” was attended by other dignitaries from the Dutch side: Minister of Public Housing, Spatial Planning, Environment and Infrastructure VROMI Miklos Giterson and Finance Minister Michael Ferrier. St. Maarten Hotel and Tourism Association (SHTA) members were also there. Oyster Bay Resort General Manager Ricardo Perez was one of the audience members welcoming the MOU signing. “On behalf of the SHTA we welcome and applaud this initiative. You can count on our support to continue positioning St. Maarten as the number one destination in the Caribbean,” he said.

To emphasise how important local culture is to tourism, delightful dance performances were presented to guests separately by students of Charlotte Brookson Academy of the Performance Arts and National Institute of the Arts (NIA).The ceremony, emceed by Marla Chermont, opened with steel pan music by Aldrich Benjamin and concluded with a toast and refreshments.