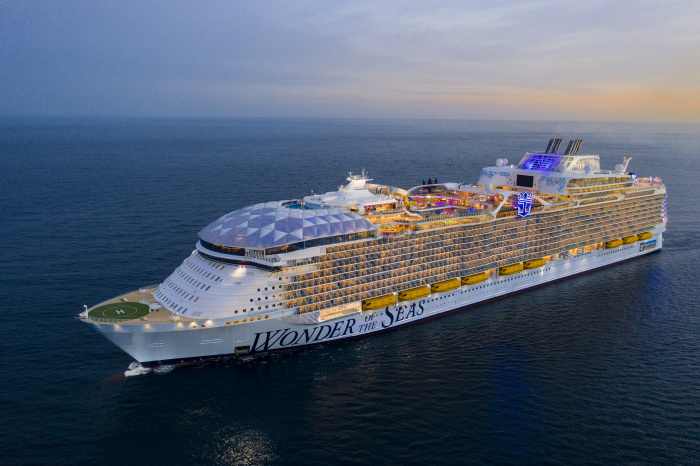 Port St. Maarten Group Chief Executive Officer (CEO) Alexander Gumbs is looking forward to the port call, adding that the cruise industry is on a path to rebounding and industry partners remain committed with many ships debuting this year and those to come.

Gumbs further said that 2022 season began softer than expected due to Omicron but March cruise figures are showing a slight increase in occupancy numbers. With the U.S. Centers for Disease Control and Prevention (CDC) lowering the cruise travel notice from a level three to two, bookings in the coming months should improve in general.

Wonder of the Seas is Royal Caribbean’s newest cruise ship which commenced with its inaugural sailing on March 4 out of Port Everglades in Fort Lauderdale, Florida, operating seven-night cruises.

These itineraries will continue run through April until the vessel heads to Europe in May for summer Mediterranean cruises.  Wonder of the Seas will return in November to Florida for Caribbean cruises.

Gumbs said that the Port currently welcomes all five of the Oasis class vessels and is still one of the few destinations in the world that can accommodate/berth two vessels simultaneously.

“We have an edge over many destinations, but they are catching up and we are in the process of extending our edge through experiences and berth accommodations,” PSG CEO Gumbs said on Thursday.

The cruise line invites vacationers of all ages on board the world’s largest cruise ship to experience the ultimate combination of all-new adventures and Royal Caribbean favorites designed to inspire wonder and awe.

The ship is 1,188 feet long, 210 feet wide, and a gross tonnage of 236,857.  The cruise ship has a passenger capacity of over 6,000 guests at double occupancy. Occupancy numbers through March averaged around 45-50 per cent.  Gumbs said that the port has noticed an uptick in that trend since the beginning of March. The crew onboard to serve the guests is 2,394, bringing the total capacity to over 9,200.

Royal Caribbean’s sister ship Symphony of the Seas, built in 2018, held the top position until Wonder of the Seas was launched at the Chantiers de l’Atlantique (Saint-Nazaire, STX France) shipyard.

The vessel has 17 decks and costs US$1.35 billion to construct. Sister ships are Allure, Harmony, Oasis and Symphony of the Seas.

According to Royal Caribbean, guests will experience Wonder’s eight unique neighborhoods – a Royal Caribbean first – variety and innovation come to life in a lineup of unparalleled thrills, more than 20 restaurants, bars and lounges, and show-stopping entertainment. Highlights include:

Suite Neighborhood – The new, eighth neighborhood welcomes Royal Suite Class guests to a private Suite Sun Deck in a new location, which features a plunge pool and bar, in addition to favorites such as exclusive restaurant Coastal Kitchen, the Suite Lounge and the grandest Ultimate Family Suite yet for a family of 10.

The Mason Jar Southern Restaurant & Bar – Where Southern comfort food meets Royal Caribbean’s hospitality and creativity. On the menu are staples and new twists on classics for brunch and dinner, and late at night, along with live country music, farmhouse-style decor, a robust collection of 19 American whiskeys and other Southern libations.

Wonder Playscape – Day and night, the underwater-themed play area is a whole new, outdoor adventure for families with kids. Slides, climbing walls, games, interactive activities that come alive by touch, imaginative puzzles and light shows engage young travelers in more ways than one. Plus, nearby is Royal Caribbean’s signature mini golf course, Wonder Dunes, with a new look and features.

Caribbean Pool Deck – At the center of the Caribbean vibes is the pool deck, where the new cantilevered Vue Bar joins the lineup of poolside hotspots, including the popular Lime & Coconut, live music; The Perfect Storm, a trio of high-speed waterslides; kids aqua park Splashaway Bay; and the adults-only Solarium.

Fan-favorites – Thrill-seekers can chase the waves on the FlowRider surf simulator, race down the tallest slide at sea, The Ultimate Abyss; brave the 10-story-high zip line; scale twin rock climbing walls; explore any one of the eight neighborhoods, like Central Park and its 20,000-plus real plants; or take in original entertainment across four “stages”: air, ice, water and theater, including inTENse, which features high-diving feats, slacklining, aerial acrobatics and more performed by the first all-female cast in the AquaTheater, the one-of-a-kind amphitheater.