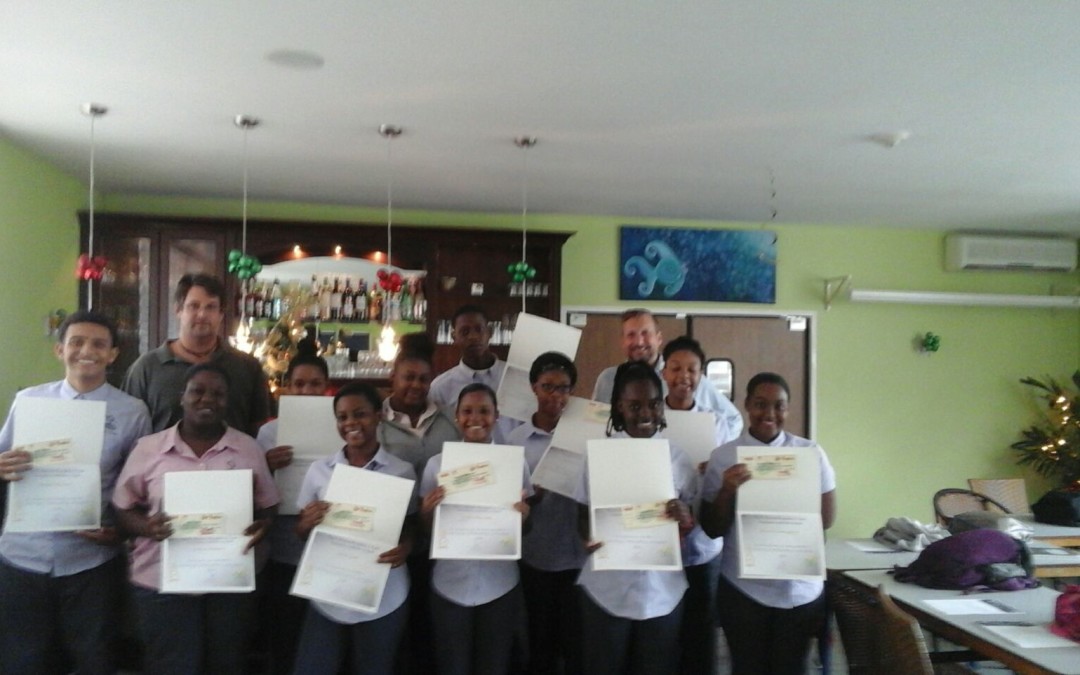 At Sundial School, Monday December 12th, all pupils involved in the Crystal Pineapple Awards were honored by receiving both an official certificate by the Sint Maarten Hospitality and Trade Association (SHTA) as well as a US$100 voucher from Prime Supermarkets. SHTA expressed gratitude regarding the proficient work of the volunteers and looking forward to continue the close working relationship with Sundial School.

The donated voucher were a spontaneous gift from Danny Ramchandani who was acknowledged by the SHTA as “Businessman of the Year” during the annual Crystal Pineapple Award. His gesture of offering $100 shopping voucher at Prime supermarkets towards acknowledging and supporting the hard working Sundial student volunteers of that night was well-received by the audience.  Ramchandani himself was awarded the title Businessman of the Year by the board of SHTA for his relentless support for Sint Maarten’s community and ability to look beyond his personal business interests to the greater good of country Sint Maarten.

Ramchandani’s gesture towards the Sundial students only illustrated how the 2016 Crystal Pineapple Awards had a large Sundial element. The well-known culinary expert teacher of Sundial Bart Peut was lauded with the “Tourism Ambassador of the Year” award for his large efforts in assisting the Sint Maarten culinary team to win a gold medal this year at Taste of the Caribbean in addition to his other efforts in preparing our students for a bright future. Sundial was highlighted even further as next to teacher Peut himself, a former pupil won the 2016 Chef of the Year award–former Sundial student Wendell Laurence, now chef at Big Fish Restaurant.

SHTA stressed not to underestimate their achievement accomplished on November 19th. Being the largest in-house event of the island, 400 people need to be catered for in a very lively and busy setting of speeches, music acts, movies and last but not least award ceremonies. That makes the annual gala a great, but steep learning curve that the pupils showed very apt coping with.

As a way to celebrate the long term cooperation with Sundial and Bart Peut and this special year working together, both SHTA team and board will enjoy the upcoming Christmas lunch at the school’s Le Source Restaurant on December 15.