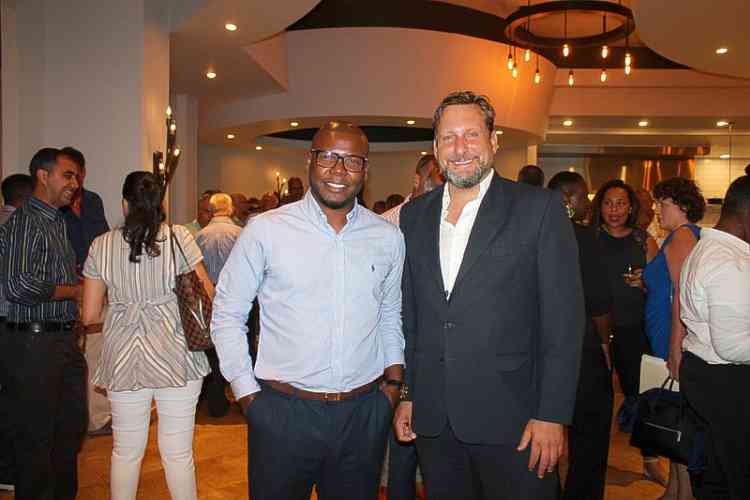 PHILIPSBURG–St. Maarten Hospitality and Trade Association (SHTA) held its annual general meeting (AGM) in Divi Little Bay Resort Tuesday evening on the theme “Controlling our Destiny” and was fortunate enough to have Jean-Marc Vermot de Boisrolin of Blvd Capital Partners in Singapore as guest speaker to give insight into how Singapore rose from a country of poverty and no natural resources to become a leading global economy and financial hub recognised the world over.

With St. Maarten and Singapore having similar backgrounds of limited resources, SHTA was interested to know how Singapore had turned its fortunes around and whether any lessons can be learnt as St. Maarten shapes its own destiny, not just for the country but for the private sector too.

SHTA Executive Director Wyb Meijer noted in his preamble that one of the founders of Singapore’s economic success was Professor Albert Winsemius of Rotterdam University who incidentally was a key adviser to the late Dr. Claude Wathey in St. Maarten in the 1960s before he switched his attention to Singapore.

“It’s interesting to know that St. Maarten and Singapore at that time both had someone who was very influential on economic development, in Claude Wathey an influence that lasted some 40 years,” observed Meijer. “But as we know, both countries went their separate ways, St. Maarten to focus on tourism.”

Born in French St. Martin, De Boisrolin went through the school system in St. Martin, Guadeloupe and university in Paris before starting his career in London. He bought a 25 per cent share in a wealth management company in Singapore in 2009 and another 25 per cent in 2015. He has been in Singapore for nine years now. The company also has offices in Hong Kong and Dubai.

Singapore faced a small domestic market and high levels of unemployment and poverty in 1965. Some 70 per cent of its households lived in badly-overcrowded conditions and one-third of its people squatted in slums on the city’s fringes. Unemployment averaged 14 per cent, gross domestic product (GDP) per capita was US $516, and half the population was illiterate.

Lee Kuan Yew governed Singapore for three decades, overseeing the separation from Malaysia and transforming the country from no natural resources into an economic Asian tiger. The country today has a population of six million, of whom two million are from Singapore and four million are ex-pats. The average annual income per inhabitant is $60,000.

“Lee was a visionary, no doubt about that,” De Boisrolin told the audience. “Everything he did and looked at was with a 10-year strategy in mind. He sent his ministers out to look at what other countries and regions were doing with the brief to report back to him with what works and what doesn’t work. What they found out was that while other countries had more to offer, their governments were corrupt.

“The pillars that made Singapore a success are good governance, opening up the port and inviting the world to trade with us so we can be a hub. With no natural resources, they have invested heavily in the population. The population is their natural resource. Their education system is one of the best in the world and is the place where it works the best. There is great emphasis on teaching, because the aim is excellence.

“Companies are required to hire Singapore employees not only in junior roles but also in key positions. Transferring the knowledge is paramount. The government also teaches the population how to invest and leverage from real estate which they will eventually own. For a government to educate and show them how, I find is brilliant.

“By the time a Singaporean is 40 or 50 he will own four or five condominiums. Singapore is literally a very wealthy island state and the population as well. Singaporeans are asset-rich compared to those in Hong Kong who are cash-rich. In Singapore the government is making sure their own people have everything they need.”

Applying for a work visa is very simple and efficient. One needs to be senior management level. There is one interview, one medical test. In two weeks, the applicant will receive the visa and can start working.

“The system is not complicated in any way because the government wants the international community to come in,” De Boisrolin.

Asked about the downsides to Singapore, he replied, “Economically, everything works well, but I would say Singapore culture seems very calculated and materialistic. And it’s gone that way because the country has been so into economic development. Another downside is that some goods are very expensive; alcohol, for example. Food, on the other hand, is relatively cheap.”

It was interesting to note that cars cost three times more to buy than in other countries, as the objective is to reduce the number of cars on the road and traffic jams. Each car is fitted with a little machine that will deduct money from the owner’s account if the car is driven on certain streets at certain times of the day. The objective again is to reduce traffic congestion.

For a final question De Boisrolin was asked what three key pieces of advice he would give the governments in St. Maarten, based on his experience in Singapore.

“One, you have to pause, because what we’re doing is not working. Look at what we have, look at what we are doing well and not well. Look at the region to see what they are doing well, look at where trade is going for the next 10 years, and then decide what best practices will come out of that. Let’s stop making the same mistakes over and over.

“Secondly, invest in the population. Nothing happens if you do not invest in them. Education, for example. And third, nation building. At some point we have to have an identity of what St. Maarten is and where we are going. We need to have a St. Maarten identity to showcase to the world.”