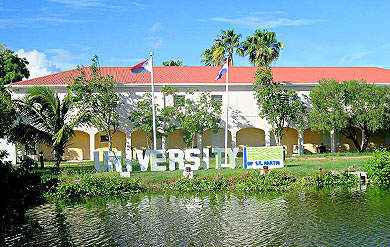 SHTA is appalled by the fact that the Government has not immediately come to the rescue of the University of St Martin, the only public university on the island, in the wake of destruction and devastation caused by Hurricanes Irma, Jose and Maria.

Rebuilding Sint Maarten after Irma, without giving serious attention to tertiary education, is setting the country up to fail –  short term and in the long run.

This is an opportunity to truly invest in schooling and training the population, to become better ambassadors of our island when interacting and serving the tourists that visit each year and spend their money supporting our economy.

In a time in which many will be unemployed, one would have expected that the Government would come up with a plan to have these persons enroll in the USM and NIPA as part of receiving unemployment benefits, and help them through these trying times by upgrading their skills. Most specifically, the indifference shown at the plight of the University is shocking; especially in light of all its recent accomplishments.  SHTA has demonstrated its own commitment to both these Institutions thru signed MOUs.

One cannot give credit to all of the talk by this Government, and its predecessors, about getting more Sint Maarteners in managerial positions as it would seem to be just lip service since the University of St Martin cannot get a structural solution to the funding it requires from government. It is the only local institution with accredited degrees in the field of hospitality and business that can train managers. The government seems to only be interested in producing workers, not persons capable of leading the major hotels, restaurants, and businesses on the island.

Again, the SHTA calls on members of Parliament to instruct the Government to work with the Dutch on the reconstruction on this island which starts with the proper training of its population via the USM and the NIPA.