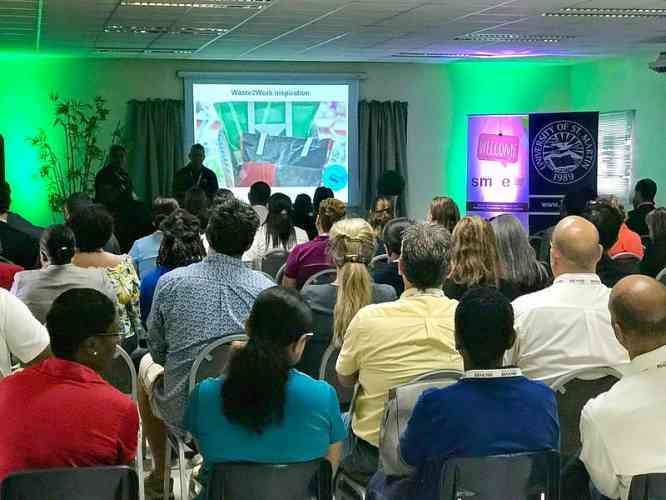 Spearheaded by St. Maarten Hospitality and Trade Association (SHTA), it was mainly aimed at the private sector and non-governmental organisations, but professionals working in governmental institutions and interested students also came to learn, gain inspiration and network.

A number of attendees told The Daily Herald that the conference exceeded expectations and that the “innovation” aspect of the conference was especially useful, as they were seeing what could be applicable to their various organisations; for example, in the fields of technology and communication.

However, audience expectations fell shorter at the question-and-answer section of the much-anticipated World Bank presentation. Although the presentation was detailed and very informative, a number of questions posed by audience members were topics that the presenter, Carlos Lago, was not in a position to answer.

An audience member in the know explained that some of the questions would better be posed to the local Interim Recovery Committee and/or the Trust Fund Steering Committee.

Some SMILE attendees commented that it was hard to choose which workshops they would attend, and that they were surprised at how interactive some of them were.

Both innovation and sustainability were key concepts of the conference, as well as the central notion of “building back better” after the destructive hurricane season of 2017. SMILE was the logical follow-up to the Build Back Better Week event held in March, and focused on the practical aspects of how organisations can progress and “do things differently.”

Regardless of profession or sector, many attendees were also interested in being updated on industry on the island, and in gaining a sense of the overall business climate and private sector sentiments on progress.

Helping to give a sense of economic outlook were some of the island’s biggest corporate players that shared updates, developments and future plans – Port St. Maarten, The Maho Group, and St. Maarten Heineken Regatta.

Minister of Public Health, Social Development and Labour Emil Lee, who had been the SHTA President for some 13 years, also attended SMILE.

Networking was another advantage of the event, which kicked off with a mixer on the evening of November 2. Based on sign-up information, some attendees were also able to meet prior to the official conference, based on their business interests.

As pointed out by SHTA Executive Director Wyb Meijer, there are a number of new companies, as well as established companies with new faces, a prime setting for sharing information and networking. “The goodwill shown by many organisations,” he added, was “amazing,” and it showed that the business community was ready to move.

After tracking and keeping an overview of the event, Meijer said that quite some businesses had reported having new leads.

One of many examples is Martin Kingma of Global Resourcing, one of the main contributors to the event. With the service officially launched at the event, Labour Compliance – making sure that businesses, including those new to the island, comply with local rules and regulations, are properly registered and insured – stemmed from an increased demand for those services following the 2017 hurricane season.

Together with partners involved in the new service, Kingma got 25 new business leads after presenting it.

Another presenter, ORCO General Manager Ronald Halman (this company also being a main event contributor), shared developments of the company’s housing project with a wide audience that included companies that may be able to join the project, such as those in the solar and electricity fields. Halman said the event went a long way in connecting local businesses and showed the resiliency of the private sector.

Karen Hana of University of St. Martin, who gave a workshop on Customer Experience, also commented on the wide range of participants – including students, teachers, and a representative of the tour operating industry.

The “National Business Card,” a programme launched for the event, will also be essential to forging new business connections – including joint ventures, which are encouraged as an important part of recovery, as tenders by the World Bank are also open to specialised foreign companies.

National Business Card is a database containing general and contact information of all organisations represented at SMILE. As SHTA has previously explained, it is expected that some projects may well lead to World Bank tenders for specialised expertise not provided on island.

By providing a platform connecting local and foreign businesses, the conference aimed to “provide ‘linkage’ instead of ‘leakage’ by keeping as much of the recovery funds on island as possible.”

Some 15 organisations from nine countries attended the event, including the Netherlands, Spain, Trinidad and Tobago, and China.

Lago gave extensive details on where and how to keep up with ongoing tenders, showed that many different types of companies can become involved in tenders (providing works, goods, consulting and non-consulting services), and went into detail about selection methods, criteria that need to be met, common shortcomings, and processes that are to be followed.

The same presentation was repeated after the official conference, so that companies who did not take part also had access to the same information.

It was apparent that some in the local business community did not leave with the information they desired, and that some advice given seemed logical and appropriate, but idealistic.

For one example, Lago said that questions are encouraged and will always be answered, but one audience member stated that they had asked for clarity on a topic more than once, to no avail.

Speaking to this newspaper after the conference, Lago stated that where nepotism is concerned, the way to combat it is to let the process be transparent. Tenders, dates and other details are all published for the public to see.

When submissions are presented, prices and other relevant details are made public, “no envelope remains unopened,” and information is signed by all bidders present. When a company wins a project, details of, e.g., pricing of that company as well as its competitors will be announced in the same places that the tenders are published.

Companies that are not awarded the projects have the right to know why, and so does the public. If a company believes it has been treated unfairly and is not getting answers, the World Bank should be notified.

Companies involved with bids will know how to contact the appropriate World Bank representative.

The public is encouraged to monitor the government pages in this newspaper, and http://www.sintmaartengov.org/government/AZ/NRPB/Pages/Tenders.aspx.

SMILE was made possible by SHTA in conjunction with St. Maarten Chamber of Commerce and Industry (COCI), ORCO Bank, Global Resourcing, USM and 360 Degrees of Innovation.