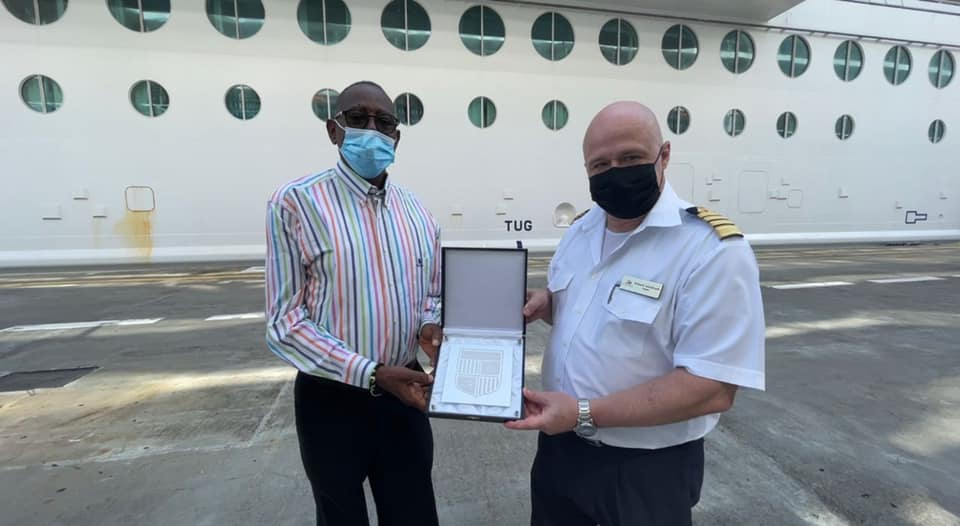 Port St. Maarten Group Chief Executive Officer (CEO) Alexander Gumbs said that Viking is a relatively new brand to ocean voyages with a unique concept offering no casinos onboard, adults only and a blend of upscale amenities. “We definitely welcome product differentiation and the feedback from the passengers were great regarding the Island experience,” CEO Gumbs said on Monday.

Viking Orion guests and crew were fully vaccinated, and the crew were allowed to go ashore and enjoy the duty-free shopping experience that the destination has to offer.

Destination St. Maarten is ranked one of the highest in terms of crew expenditures and the Port St. Maarten Group are happy that crew members are being allowed to disembark and enjoy the ‘Friendly Island’ experience.

Viking Cruises, is considered the leader in river and small ship ocean cruising, offers destination-focused itineraries designed for experienced travelers who have an interest in geography, culture, and history.

Viking currently operates a fleet of more than 70 vessels, offering scenic cruising along the rivers and oceans of the Americas, Europe, Russia, Egypt, China, and Southeast Asia.

In 2015, Viking introduced its first ocean ship with the naming of the 930-guest all-veranda Viking Star. One year later, Viking launched its second ocean ship, Viking Sea, which was joined by sister ship Viking Sky in 2017, Viking Orion in 2018 and Viking Jupiter in 2019. In May 2021, Viking welcomed its newest sister ship, Viking Venus, to the fleet. Viking Saturn will the join the company’s award-winning fleet in early 2023.

In its first year of operation, Viking Ocean Cruises was rated the #1 ocean cruise line in Travel + Leisure’s 2016 “World’s Best” Awards. With more than 250 awards to its name, Viking has been rated the #1 River Cruise Line and #1 Ocean Cruise Line by Condé Nast Traveler in the publication’s 2021 Readers’ Choice Awards. Viking has also been consistently rated the #1 ocean cruise line and one of the best river cruise lines in Travel + Leisure’s “World’s Best” Awards.

Viking was founded in 1997 with the purchase of four ships in Russia. In 2000, the company purchased Europe’s KD River Cruises in order to grow its fleet, to leverage 40 years of river cruising experience and to acquire rights to prime docking locations in key European cities.

The company expanded into the American market in 2000, establishing US headquarters in Los Angeles, California. Through rapid expansion, the company has grown to be The World’s Leading River Cruise Line, with double-digit growth in recent years. And with the launch of its ocean fleet in 2015, the company has also become the leader in small ship ocean cruising.