Wet, windy and wonderful! The best way to describe the 7th edition of the Lagoonies Regatta sailed by 12 teams. 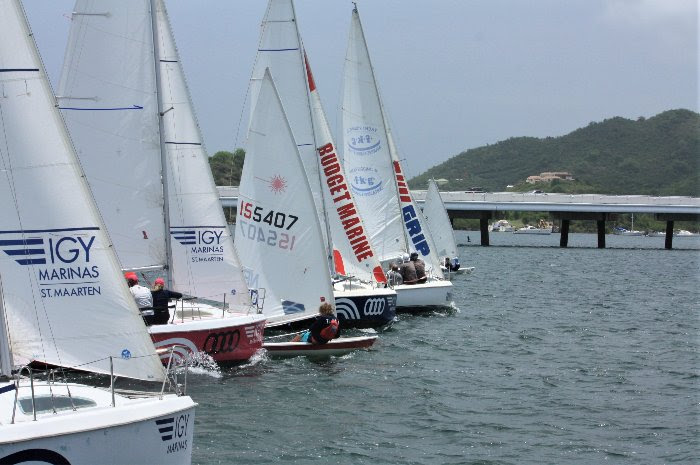 June 28, 2021 – Simpson Bay Lagoon, Sint Maarten – Last Saturday morning brought wet and windy conditions, this did not stop the 12 registered teams from sailing out to the start line to take part in the 7th edition of the Lagoonies Regatta. This year the event included Laser and RS Quest classes, besides the popular Sunfast 20 class. A total of 11 races were sailed and although the rain stopped in the afternoon, the wind remained gusty, making for challenging conditions.

Six Sunfast 20s, 3 Lasers and 3 RS Quests sailed 5 races in the morning. The Race Committee decided on mainly windward leeward courses, with 1 longer race towards the Sint Maarten Yacht Club. A particularly large squall caused a brief postponement as the wind was too shifty to start again.

“This year we saw a terrific group of sailors on the water, true veterans like Frits Bus, Ernst Looser and Simon Manley took on less experienced teams like the all-women’s team Maritime School of the West Indies, with Jessica Sweeney at the helm, and Team Lagoonies in the Sunfast 20s. In the Laser class we saw regulars like Justin Pieterse and Kai Henriquez sail against their instructor Sam Peeks. And the RS Quests saw many of our youth sailors having a great time out on the water. Experienced or not, all teams challenged each other. I was especially impressed with Veronica Destin helming one of the RS Quests, with Melina de Vries as her crew, as they got over the start line ahead of the others most of the time” Explained Garth Steyn, Race Officer.

Lunch took place at Lagoonies Bistro & Bar after which the teams went out again to sail another 6 races. In the Sunfast 20 class Team Friendly Sailors continued their winning spree, with 4 bullets back-to-back. Team Island Water World also got a bunch of energy after lunch and was found in the top 3 of the fleet for most of the afternoon, battling it out with Team Han and Team Scubashop. Team Lagoonies, despite being at the back of the fleet, had a lot of fun and learned a lot as the day progressed. Unfortunately, Team Maritime School of the West Indies had to retire from racing due to a broken boom after race 7. Overall results in the Sunfast 20 class saw Team Maritime School of the West Indies in third place, Team Scubashop in second place and Team Friendly Sailors took the overall win.

In the RS Quest class Lucas Disch and Francener Faustin sailed well and manage to take bullets the entire afternoon of racing. They were chased around the course by Veronica Destin and Melina de Vries who had a weight disadvantage in the windy conditions. Father and son, John and Henry Darling, only recently started sailing the RS Quest together, but you could hardly tell when looking at the results. In the end Veronica and Melina took third place, the Darlings second place and Lucas and Francener first place.

Some of the closest racing took place in the Laser Class, often with mere seconds between competitors. Kai Henriquez in a Standard came really close to a win against the 2 Radial sailors, Justin Pieterse and Sam Peeks, but ended up in third place overall. Sam and Justin fought it out as they switched between first and second place throughout the day, in the end Justin came in second with only one point difference behind Sam Peeks in first place.

Prize giving was hosted by Lagoonies, with prizes donated by Budget Marine and Mount Gay Rum. Organizers thanked all who made the event happen, including a new volunteer, Martin, who joined the race committee for the very first time. Next year’s event will go back to its original concept, with a rotation schedule, allowing to accommodate more participants in the Sunfast 20s. Organizers are also looking forward to further grow the RS Quest and Laser fleet.