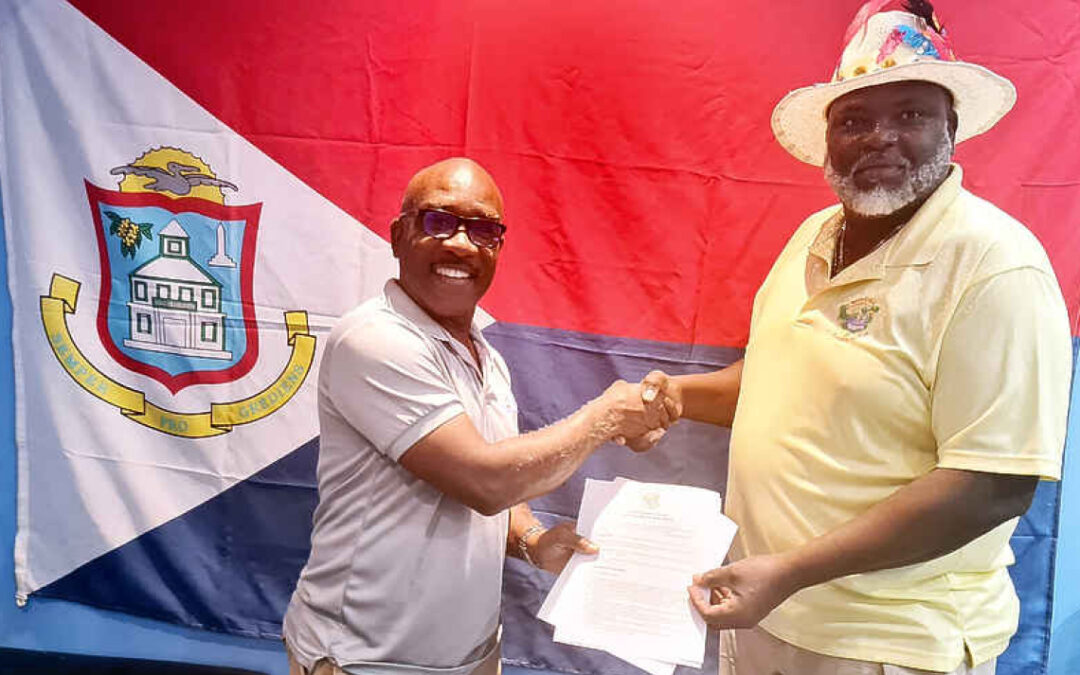 PHILIPSBURG–St. Maarten Carnival Development Foundation (SCDF) took a major step towards reviving a very important part of Carnival when it outsourced the organisation of the Junior Calypso Show to Dow’s Musical Foundation on Thursday.

After an absence of almost 10 years from the Carnival schedule, cultural icon and musical ambassador Isidore “The Mighty Dow” York has taken up the challenge to set the junior competition on a sustainable path and preserve the future of calypso in the process.

York will target the schools as the main source from which to attract young singers. He is already a mainstay in several schools as a music teacher through his steel-pan programme and will seek to secure the cooperation of several senior calypsonians in the revival of the art-form on the junior level, said SCDF.

The Junior Calypso Competition is included on the Carnival 2023 schedule of events and was a top priority of new President of SCDF Edwardo Radjouki, who was determined to see the show held in 2023.

“When I was elected, I said the goal of the foundation during my tenure would be to re-instil many cultural parts of our festival that needed attention before they were lost forever. Junior Calypso was at the top of that list and more are still to come. With The Mighty Dow on board, and I must mention Cheryl Arnell, who also forms part of the team, we know we have the right people in place to bring back Junior Calypso,” Radjouki said.

He added that SCDF is grateful that DMF has decided to put its energy and organisation behind the event. He also explained that the foundation looked at other options for the junior show, but settled on DMF due to its ties to many schools and parents of children who have expressed interest in calypso from their interactions with Dow.

The Mighty Dow described this opportunity as a “wonderful one” and an effort that is long overdue for the preservation of calypso on St. Maarten. He complimented SCDF for reaching out and showing that it is more than willing to trust important parts of Carnival to those of us who have a history in Carnival and love this art-form. “Dow Musical Foundation is more than happy to work with SCDF and is in a good position to finally get this done,” Dow said.

He took time to recognise others who have attempted a revival and for one reason or the other were not successful. However, he knows the history and expertise that DMF is bringing to the project. “Personally, having come from a line of artistes, musicians and calypso singers, this is important to me. I began singing calypso at the age of 17 because back then we didn’t have a junior competition. My son is a six-time Junior Calypso Monarch and a three-time OECS [Organisation of Eastern Caribbean States – Ed.] Calypso Monarch, which was held in St. Kitts. So, I know the importance of the juniors to the art-form,” he added.

He said his goal is to see to it that the competition is organised with longevity in mind. For that to happen he said, the support of the general public will be needed and that of the business/private sector.

“Everyone must be involved. If your child doesn’t have me as a music teacher, don’t be hesitant to register them for the competition. And when the show is finally held, we want to see all schools out in full force to support their school mates and friends. This is the way we will preserve calypso, through the youth, but it has to get the support of the entire community,” Dow said.

He mentioned that senior calypso singer Andrew “Baker Jr.” Richardson has already pledged his support to assist with writing and guidance and he hopes others will do the same. “It is also our responsibility as senior calypsonians to ensure that our art-form survives,” he continued. “We can accomplish that by working with the youth and trying to instil the same love and passion we have for calypso in them.”

Registration for the 2023 Junior Calypso Competition is now open. Interested parents can register their children through the online platform of the SCDF by using the link:

sxmcarnival.bio.link. Age range for the show is eight to 16 years of age.

The show will be held in March as a pre-Carnival special event and details about the venue will be released at a later date.